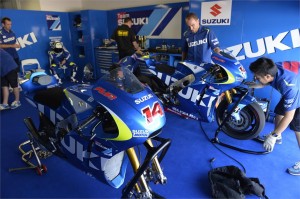 The first episode is now live also on Team Suzuki Racing www.suzuki-racing.com, with further programmes due for release on January 4th, January 7th and January 10th.

Episode 2 moves to Twin Ring Motegi in Japan in April and May where MotoGP rider Randy De Puniet joins the team as test rider. It is also announced that Davide Brivio has been appointed as Suzuki MotoGP Test Team Manager, with first interviews with both. Available on January 4th.

Episode 3 covers the first of the European tests at Catalunya and Motorland Aragon, Spain in June where the world media gets its first glimpse of the newly-liveried machine and where it is announced that Suzuki will make its official MotoGP comeback in 2015.